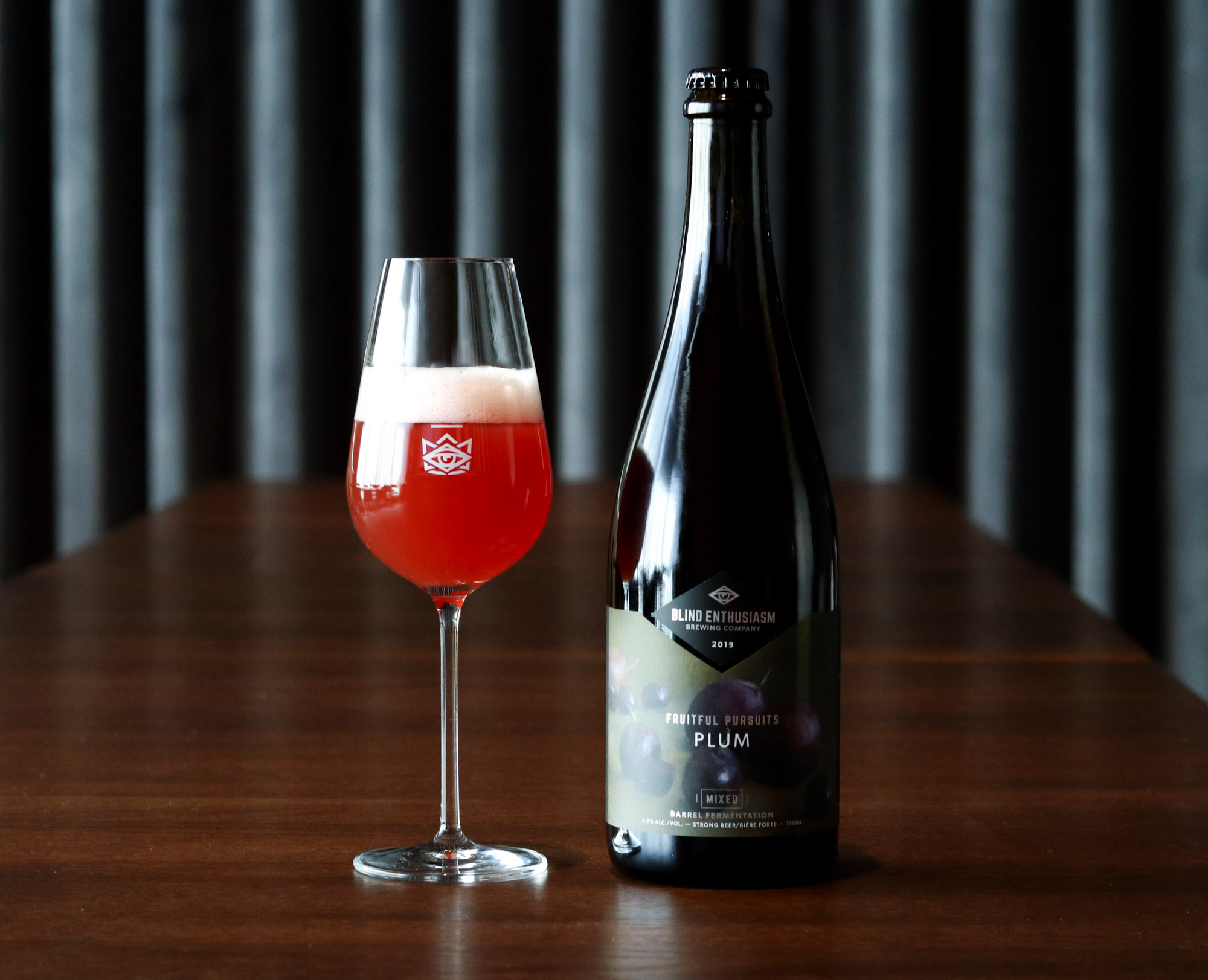 The fourth release from The Monolith is another first: it is our first fruit beer. Fruitful Pursuits: Plum is the first in a series of fruit beers from The Monolith. We’ll be doing a number of fruit beers under the “Fruitful Pursuits” umbrella that will be accompanied by the fruit or blend of fruits in the name. To create this beer, we used more than 750kg of ripe Damson and Presidents plums shipped directly from the Okanagan. We processed the plums by hand (removing about a third of the pits and squishing them to disrupt the skins), and then added the crushed plums to our specially designed fruiting tanks. We have very fond memories of “Plum Squishing Day”!

We used whole fruit to make this beer, the hardest and most time-consuming way to make a fruit beer. But it’s absolutely worth it.

The barrels selected for this blend were from batches of mix-fermentation beer from our first year of production. We selected nicely balanced and fruit forward barrels to enhance the Plum character with the knowledge that the plums will add some brisk acidity to the beer. The plums sat on the beer for two months and the mixture went through another round of fermentation as the sugar from the plums was consumed. The resulting beer has a beautiful ruby-purple color, lots of bold plum character and a medium-high acidity. We always aim for balance in our beers, and even though Fruitful Pursuits: Plum is our most acidic beer to date it is still has a delightful fruit character and full texture.

Fruit beers are fairly common and there are several different processes that breweries use to create them. If one were looking for just fruit flavouring, one could simply use a fruit extract, a chemically processed syrup that contains “fruit essence” or artificial fruit flavour. Many breweries wanting a natural fruit flavour use pureed fruit, which is mechanically processed fruit, processed and often pasteurized to be easier to transport and utilize. Traditionally breweries would use fresh, unprocessed whole fruit, which not only adds flavour of the fruit but also character from the skins, seeds, and stems. The fruit (whatever the source) is generally added after primary fermentation. With almost all methods, apart from fruit extract as it adds next to no sugar, the beer and fruit will go through a secondary fermentation. This fermentation will vary in time and complexity depending on the availability of the sugar and complexity of fermentation. A puree has fermentable sugars that are well disrupted and readily accessible, thus fermenting quickly and cleanly. The puree processing removes parts of fruit that could also add further complexity. Using whole or lightly crushed fruit leads to a slow fermentation process because the sugars are not as readily available. This benefits different microorganisms from the beer and fruit allowing time to create different compounds adding to flavour complexity and depth. Different parts of the fruit such as the stems and seeds also have time to break down and release tannins, phenolic compounds, and acids further adding to the depth of flavour and colour.

In many ways Fruitful Pursuits: Plum is an homage to the great fruit beers of our favorite traditional breweries. There for, as you may have guessed, we used whole fruit to make this beer, which admittedly is the most labour intensive and time-consuming way to make a fruit beer. But it is absolutely worth it! Fruitful Pursuits: Plum was a lot of work, it was also a true labour of love. We’re really proud of this beer and look forward to its imminent release on Friday, August 21st. We’ll have 750ml and 375ml bottles available at our location, as well as select liquor stores throughout Alberta. We hope you like it.